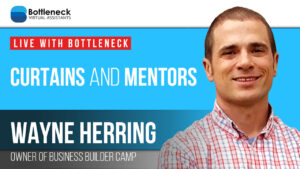 Today on Live with Bottleneck, we have Wayne Herring, the founder of Business Builder Camp to talk about how we can push ourselves to learn and discover new things through moving the big curtains in our lives to see the greater side behind it. Wayne is a business coach who helps entrepreneurs to build and grow their businesses.

Wayne gives out more information about who he is and what he does to help other people grow their business. He introduced himself as a coach to business owners. Additionally, Jamie asked Wayne to elaborate on the idea of curtains and mentors, and Wayne tells a little story that there were big curtains in his life where a mentor came and made him discover things that he does not know.

“The idea is that there are curtains in life that exist. Sometimes we’re on this side of the curtain, and other people are on the other side, doesn’t mean they’re ahead of us, they’re better than us or any of those things. It just means they’re over there and they know some things that we don’t know or they’ve experienced things that we aren’t aware of. If we can find a mentor or a peer or somebody to help us part the curtain or move the curtain to the side, we look around and realize that’s how things happen on this site, and we had no idea.” – Wayne Herring

Comparing Yourself to Other People

Wayne mentions his reading recommendation: Steven Pressfield’s War of Art. It is a book that focuses on people behaving like they are living in a hierarchy where they have to compare themselves to people above or below them. Wayne says that he likes the idea of the book because it’s a way to remind himself and other people to be happy, content, and thankful for what they have.

“You know we’re talking about gathering men together to have these camps and to do our mastermind work. You’re doing assistance, and you’re making these great connections from far away. Neither one of those is better. I’m painting on my canvas, and you’re painting on your canvas. We can both learn from each other, and we can both find curtains that I know about that you don’t.” – Wayne Herring

Wayne also shares that he coaches entrepreneurs to grow their business by helping them to set up goals and aim for what they want. Not only to help about business topics, but he also helps the people he is working with through advising about their personal lives.

“We’ve got things to help people that are early on the entrepreneur journey. We’ve got a program we call the base camp to help people get in a rhythm of taking self-inventory of what they want and then setting goals.” – Wayne Herring

To know more about Wayne Herring and Curtains and Mentors, watch this episode.

As the founder of Business Builder Camp, Wayne Herring has helped men across the country grow their businesses into successful and thriving enterprises. However, there is so much more to his story than simply “founder.”

Wayne has worked as a specialty drilling, blasting, and rockfall contractor and as an organic farmer. He has grown the sales force and increased the revenue of a company his father started. He has run ultra marathons, gone on epic road trips, and is the 1997 Montana state arm wrestling champion.

Wayne is a father and a recovered alcoholic. He loves to hunt and raise cows and pigs on his family farm, but he also enjoys yoga and meditation. Some have described Wayne as a renaissance man, but he thinks that is a strange term for the son of a coal miner.

Having grown a business and coached other business owners, Wayne understands we all have times in our lives where we are blocked. He founded Business Builders Camp to help men overcome those obstacles in building and growing their businesses.

Wayne pushes the members of his Camp to see new possibilities, discover new tools, and see the gifts they didn’t know they had. Additionally, Wayne is passionate about gathering his Camp together so they can learn from and push each other.