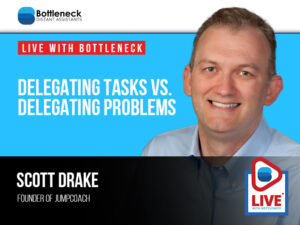 Scott Drake is a sought-after consultant and trainer who made every mistake when rising through the leadership ranks. After seeing emerging leaders on his teams repeating the same mistakes, he set out to find a simpler and faster way to grow leaders. When he couldn’t find a shortcut, he invented one.

So if you want to become an effective leader in your company, stay tuned to this episode.

Who is Scott Drake?

The conversation starts off with an introduction of Scott Drake. Scott’s background has always been in tech, and he started out his career as a computer programmer. But he has always aspired to do more and move into the leadership ranks.

“I have always liked the idea of being in control and being able to make decisions and some of those things that you think of leadership is about. Until you get into leadership (roles) and you realize it’s not.” – Scott Drake

He started his own development shop as a small business owner, but eventually went back to the corporate world. It was only in 2021 that he left Corporate America again to start his own venture once more.

The Struggles of Leadership

Scott Drake shares his struggles on starting his own venture again, mostly with his leadership and his delegation skills. It has hard to understand at first how he could work through others to get things done, as he was used to getting it all done on his own.

This caused a certain disengagement with the team, and burnout on Scott’s side.

So he started researching ways to improve his leadership and delegation skills. In the course of his research, he found that he was not alone in his plight.

“I started seeing leaders burning themselves out and being unable to delegate, being unable to work through other to get things done. I thought, “there’s got to be a better way to do this.” – Scott Drake

That said, Scott Drake defines the difference between delegating tasks versus delegating problems to your team.

With delegating tasks, these are often routine work that is done on a schedule. The purpose of delegating tasks is efficiency, so you as a business leader can focus on other important and high-level stuff for the company.

The difference with delegating problems is that it is not a routine work. It is often irregular, something that needs time, patience, and creativity to solve. When you delegate problems to be solved by another individual, you should expect that there will be a learning curve to it, and It might not be done in one go.

The issue with most leaders is that they cannot differentiate within the two. So when people delegate problems to their team, they expect it to be done efficiency, and as soon as possible. That is where the disconnect lies, and it is one of the things that Scott coach leaders about.

“Where we really struggle in (problem) delegation is when we have to give somebody a problem and we don’t accept that we’ve got to build in learning loops and do these other things around it. We often lose patience and struggle to get value out of working with other people. So it’s really understanding that there are two types of things that we delegate: routine work versus creative work.”  – Scott Drake

To hear more from Scott Drake and learn about how you can properly delegate your work, continue listening to this episode.

Scott Drake’s journey into leadership was long, painful, and he made every mistake in the book. It took him 10 years to thrive as a leader and not feel like an imposter.

When he became a leader of leaders, he saw next-generation leaders making the same mistakes and having the same struggles. Selfishly, he couldn’t spend 10 years watching new leaders wreck his teams while they figured out how to lead, so he began searching for a faster way to teach leadership. That search turned into a five-year research project and the innovations that are now JumpCoach.

In 2021, Scott left an executive role in medical education and founded JumpCoach to make best-in-class leadership training available to everyone who needs it.