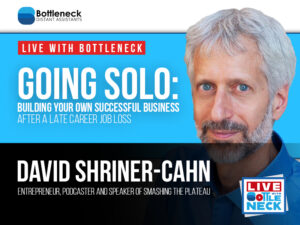 People usually start their career in an organizational setting as an employee before shifting into a solo entrepreneur. For most, that transition is quite challenging as they have to adapt to a different setting. David Shriner-Cahn has experienced that phase. He launched a podcast called Going Solo where he talks about the challenges of being an entrepreneur for the time.

Smashing the Plateau and Going Solo

“Going solo is more on how you gain a foothold in a particular niche, and how do you establish a brand and a name for yourself and your reputation.” – David Shriner-Cahn

David says that job loss is very traumatic, and it is fraught with all kinds of negative emotions. He advises that people need to create a space for themselves to address the emotional impact of being fired. Also, he says that they should take time to do some self-reflection work instead of trying to build a business immediately.

Taking Off the Mental Pressure

Some people are not in a good financial position. Others might have only a few months to find a new source of income. David says that you can do something different. It will take the pressure off you mentally from trying to succeed in a whole new working environment.

“First of all, one of the things that I think it’s important to do while you’re in this interim period, while you’re doing some self-reflection is: to also look at who you really feel compelled to serve. What you think they need so you can spend the time not only doing self-reflection but also doing some very low-level market research?” – David Shriner-Cahn

To know more about GOING SOLO: Building Your Own Successful Business After a Late Career Job Loss and David Shriner-Cahn, watch this episode.

After 28 years as a highly-skilled employee, David Shriner-Cahn was told that his job was over. In spite of the immediate trauma and fear, he knew that as his next step, he’d rather work for himself and have more control over his destiny. That was in 2006.

Today, David is a thriving entrepreneur, podcaster, and speaker. He is guiding highly skilled professionals who are recovering from a late-career job loss and who yearn to impact the world with their knowledge and creativity by becoming successful entrepreneurs.