How to Aviate, Navigate and Communicate During Traumatic Life Events | Dave Sanderson 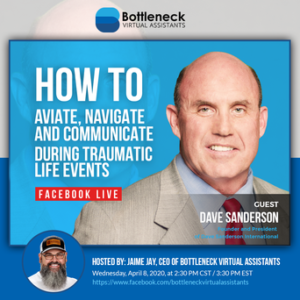 There are a lot of times where we experience different kinds of challenges. Sometimes, we need a little help from someone to surpass those. So to help, Dave Sanderson is here with us today to talk about a strategy called aviate, navigate, and communicate. He is a professional speaker and the founder and president of Dave Sanderson International.

Dave shares his traumatic experience from a plane crash known as “The Miracle on the Hudson.” Through this experience, he connects his definition of aviate, navigate, and communicate.

Aviate is to keep the plane up, navigate is to get to where you are supposed to be, and that you should communicate while you are doing these. He also says that certainty is important to be able to succeed.

“All these things in our life that we live for certainty are being rocked. So how do you aviate? How do you keep your own personal plane up as aviate? Once you keep it up, how do you navigate and get to that place, keep it going in a direction you want to go? Third, while you’re doing all this, you got to communicate effectively. Right now, that’s a challenging thing to do.” – Dave Sanderson

Dave says that you have to equip yourself with focused execution to keep your play up. He also says that missing a step can devastate your business and your life. So, every detail must be executed properly to avoid being left behind.

“Now, some people who are compromised are in really bad situations, because it was going on so casually, casually. So how do you fix that with focused execution? You can’t miss details right now. So the first thing I share with people is to aviate, deeper cleanup by having focused execution on everything that you do.” – Dave Sanderson

Dave advises those who want to aviate, navigate, and communicate to reach out to someone and find out their strategies. He says that modeling is effective because somebody has done something before that you haven’t. He also shares a strategy called Virtual Roundtable, where you can gather a lot of information with different experienced people from the past.

“Virtual roundtable strategy has helped me tremendously. It’s not a mastermind, because masterminds get together. A roundtable is somebody, or somebody used in the past you can call on and get their information to be able to use it strategy right now. Implement it and get an outcome”.  – Dave Sanderson

To know more about How to Aviate, Navigate, and Communicate During Traumatic Life Events and Dave Sanderson, watch this episode.

On January 15, 2009, in New York’s freezing Hudson River following a bird strike-induced loss of both engines, Dave was one of the 155 passengers, one of the last passengers off flight 1549 – known today as “The Miracle on the Hudson.”

He was largely responsible for making certain others made it out safely.

Since the Miracle on the Hudson, Dave has spoken over 1800 times around the world and had the opportunity to meet and work with leaders from several industries.

Using his 30+ years in being a top sales producer, ten years of being the head of security for Anthony Robbins and his unique experience of surviving a plane crash, he has learned and speaks about using your personal leadership skills to find your DISTINCT ADVANTAGE- your PITTChE ( Point In Time That Changes Everything!)

Dave has been appeared on Fox News, CBS, CTV, Global TV, NewsTalk1010 and numerous local TV and Radio stations and has been featured in publications such as “SUCCESS” Magazine, “Entrepreneur” and “AARP Magazine”. Dave has helped the American Red Cross raise over $14.7M since the Miracle on the Hudson. In addition to speaking, mentoring, coaching, and training, Dave delivers workshops on personal and servant leadership and increasing personal performance in critical times. He is a highly sought- after Podcast celebrity, author of the best-selling book, Moments Matter. He hosts his own show streaming through Amazon Alexa, Voice of Personal Leadership. In his TEDx talk, Bouncing Back, Dave shares strategies on PTGS (Post Traumatic Growth Syndrome).

Dave is a faculty member with Dominique Wilkins, Don Barden, Brittany Tucker, and Steve Nedvidek at the Leadership Mindset Series based in Atlanta GA. In his private group, IMPACT, Dave helps to grow his team with their leadership skills and with proximity to like-minded, focused servant leaders. Through his online course, Cultivating Personal Leadership, Dave shares the best strategies he has learned from some of the greatest leaders he has personally met, studied under, and implemented in his life to become a top producer, sought after speaker, author, and entrepreneur. Dave is married to Terri and has 4 children. He resides in Charlotte, NC.