How to Turn Your Message Into a Podcast! | Aaron Wexler 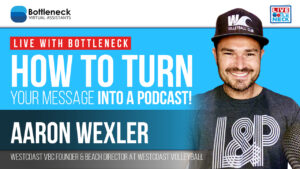 WestCoast VBC founder Aaron Wexler joins us today on this episode of Live With Bottleneck. He talks about his new-found passion project during this pandemic- podcasting. Aaron shares tips on how to make your message reach more people by turning it into a podcast.

Aaron starts off by discussing that he has a recurring theme for his podcasts. He focuses his interviews on “inspired living.” He says that his discussions center more on what are the things that provide joy in the lives of the people he interviews.

Aaron adds that this topic often proceeds to mindfulness which is his bigger theme. In addition to that, Aaron says that his interviewees find inspiration not just in their crafts but also outside of it. He says that inspiration is everywhere – even in other people.

“[Mindfulness] a word that basically encapsulates the whole theme of what I’m doing here. This project is just living your life mindfully. Whether it’s doing a podcast or you’re a champion, you’re an olympian, you’re a teacher,  or you’re a CEO. How do you do all those things mindfully?” – Aaron Wexler

Moving forward, Aaron says that finding a new skill set has been therapeutic for him. He elaborates that podcasting is new for him and learning it has been fun. Aaron says that it is a fun challenge for him. He adds that he feels joy in connecting and finding a vibe with the people he interviews. He stresses that learning must give a fun experience for oneself.

“Whether you’re a business person, whatever you are, I think that one of the main purposes of life is to have fun.” – Aaron Wexler

Aaron encourages everyone to start podcasting. He believes that everyone has a message to share. He also shares that his whole world opened up when he started doing it. Aaron revealed that being vulnerable is a part of podcasting because he is live on air which has its challenges. However, he says that this vulnerability is a segue to make his message more clear to his listeners.

“I really want to motivate anyone listening to just say where are you vulnerable and where are you not vulnerable. How can you be more vulnerable? Just let it out and just don’t be afraid.” – Aaron Wexler

To know more about turning your message into a podcast and for more information about Aaron Wexler, watch this episode.

Aaron just launched his podcast called “Within The Game” which is all about inspired living for athletes, coaches, and entrepreneurs. A Santa Monica native and UCLA graduate, he is the Founder and Owner of WestCoast BEACH, a year round beach volleyball club in Santa Monica, CA. He is also working on finishing his first book about inspired living for athletes!

Posted in Live and tagged Podcasting