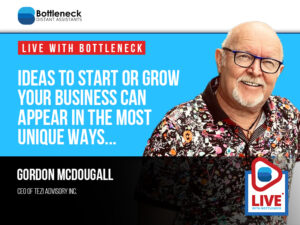 In this episode of Live with Bottleneck, our guest Gordon McDougall teaches us how opportunities to grow your business can come from unexpected ways. We at Bottleneck certainly know for a fact that this is true, particularly during the initial onset of the pandemic.

Gordon McDougall has long been in the world of companies and finances. When he was approached by a friend to start a company, he began his 30-year journey of startups, entrepreneurship, and mentoring others.

So if you want to learn more on how you can broaden your mind and look for opportunities in the most unique ways, stay tuned to this episode.

Who is Gordon McDougall?

Gordon McDougall was a stockbroker in the 1980s. After being invited to start a company with a friend, he then transitioned to being an entrepreneur and have launched several startups over the years. From all that, he had several successful business ventures, and some spectacular failures as well.

Though according to Gordon, those failures were important too, as they served as important lessons on what not to do. In some cases, it can teach you how your business can react to certain situations, like a sudden collapse in the market, or in the current situation, a pandemic.

“That’s where so much learning takes place; when you bump into obstacles or you have things go sideways. So I just wanted to let folks know that it’s not just about, “oh everything went great and wonderful!” Because in business, we all know obstacles often come up, and things can get out of our control.” – Gordon McDougall

Ideas to Start or Grow Your Business from Unexpected Ways

Gordon shares that sometimes, ideas for grow can come from struggles that we are experiencing in the company. While looking for a solution to a problem, we find ways that have not been explored before.

Sometimes it could be right in front of us the whole time. Maybe a system you’ve been using in the company that was made internally is something that is not in the market yet.

It can even be a case of being at the right place at the right time, or being first to realize something and act on it. This was especially the case for one of his encounters with a presenter at Fuckup Nights, which led to a business opportunity for both parties.

The point is, you have to be open to accepting these ideas in the first place, and paying attention to what’s going on around you.

If you’re intent on brainstorming for an idea to grow your business, Gordon McDougall suggests you start by solving a problem. Businesses are born because they have found a solution to a kind of problem that no one has solved before.

This was the case for Gordon’s The Art Reverie, which started as something his son wanted to do in order to cheer up his mother.

“In the case of Art Reverie business, there are thousands of brilliant and talented artists that either don’t want to deal with the business side, or don’t know how to. But they would like to make money from their artwork. They would much prefer to focus their time and energy on their art. So that was the pain point.

We take care of all the business of selling art, and then we send the money (to them). It’s a pretty, simple business.” – Gordon McDougall

Yet despite being a simple model, there wasn’t anyone who have solved the problem back then on a big enough scale. Hence the success of an idea from an unlikely origin.

To hear more from Gordon McDougall and how ideas to grow your business can appear in the most unique ways, continue listening to this episode.

As a stockbroker in the 1980’s, Gordon learned about the world of companies and finances, and then a friend approached him with the idea of starting a company. 30 some odd years later and after several startups, reorganizations, and a lot of fundraising he loves being an entrepreneur and coaching entrepreneurs.