Keeping Up with the Joneses | A Week in Review 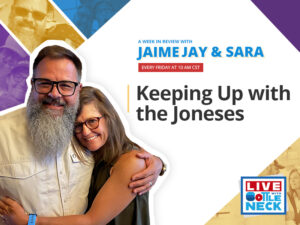 If you’re a fan of comedy-action movies, you might have watched the movie Keeping Up with the Joneses. It’s about a couple trying to keep up with their neighbors’ sophisticated life by doing their best to attain the social status that their neighbors have. This phrase became common, and it refers to the practice of keeping up with someone else’s possessions.

So today, Bottleneck Distant Assistants CEO Jaime Jay and COO Sara Knox explain how keeping up with the Joneses is a bad habit to have and why you should avoid it.

Living a Healthy Life with Contentment

Jaime shares that he’d been from one corporate to another because he thought the other one is better. He believed in the saying, “The grass is greener on the other side.”, but eventually realized that it brings discontent. The moral of Jaime’s experience is always to be grateful for what you have and learn to appreciate everything.

“There’s always going to be something new coming out or that next thing. That brings discontent, and it’s just not a healthy thing for us. That’s a bad game to get into, and it’s not a good habit to focus.” – Jaime Jay

Keeping Up with the Joneses is Bad

Sara and Jaime believe that it’s fine to want something as long as you want it for yourself and as long as it fits your needs. He says that it’s not good to get something just because someone has it. Sometimes, they might get themselves some fancy things, but they didn’t get it just to impress people:

“There’s a clear delineation in my mind from wanting something really nice versus I want that because they have that. Just so you know, you get the latest gadget, and a week later, the latest gadget is old. So, you never really can keep up with the Joneses.” – Jaime Jay

Being Transparent with Everyone

Sara says that someone might think that the grass is greener on their side because they’ve got good systems and processes. Jaime says that you never know what happens behind closed doors, and it took a lot of challenges before they’ve got what they have right now. So, they hope that the challenges they share can help everyone:

“Sharing these challenges with others hopefully lets you learn something from what we’ve learned, some kind of a trick to improve your situation. So, that’s still the goal, and that’s why we want to be so transparent with you.” – Jaime Jay

To know more about Bottleneck Distant Assistants CEO Jaime Jay and COO Sara Knox and Keeping Up with the Joneses, watch this episode.

Jaime and Sara run a business that helps business owners alleviate the mundane details of their daily lives that free them up to do their best work. The company is called Bottleneck Virtual Assistants. Jaime and Sara are a married couple who enjoys spending time together playing hockey, boating, spending time with family and friends, and traveling. They also love their dog, Nikita.

Sara and Jaime went out on their back porch on this beautiful sunny day in Springfield, MO. From their back deck, they talk about all the workflows they are putting in place, building a great culture within their organization from a distant relationship – or remote-based environment. They discuss the challenges, but they also enjoy the successes.

If you have any questions, send them to me at info@bottleneck.online. Hope to see you on the Livestream!!