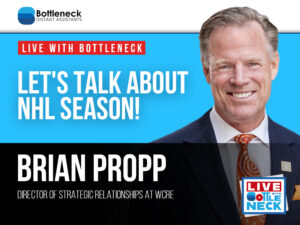 Despite the COVID-19 pandemic, the NHL or National Hockey League is still up for a fight. It is indeed a good time to be alive for excited hockey fans out there as the NHL season starts on Jan. 13, 2021, and ends on May 8.

To start this season in a fun and better way, Brian Propp joins us today to talk all about his history and fantastic experiences as a former Canadian professional ice hockey player. He is now a part of WCRE as Director of Strategic Relationships, and he promotes the brand widely as a C-level ambassador.

Before going into Brian’s Hockey history, he told a little bit of a story about his ventures with his product, Guffaw Cigars. He has been a cigar smoker since he started in the league in 1979. Two and a half years ago, he and his son visited a cigar factory where they learned how to make them and found out that it’s fun.

“I was always interested in creating my own brand. It took me a while to build it up and get it all set up. For the last six months, I’ve been selling them at Guffawcigars online from the Dominican Republic and it’s going really well.” – Brian Propp

Playing with Lemieux and Gretzky

A hockey fan from the audience asked Brian what it’s like to play with professional ice hockey players Mario Lemieux and Wayne Gretzky. He said that it was nice to finally win with a three-game series, which was one of the best in history for the Russians against the Canadians. He also said that the game was tough, but they had great players.

“It was really special because I’ve been with Gretzky when I first came in 79-80, and I played against Lemieux a lot in Pittsburgh when he started in 84-85. So, it gave me a chance to get to know them, talk with them, and be on the same side as them.” – Brian Propp

The NHL Before Vs. Today

Jaime asks Brian about his thoughts on NHL from the time he played versus the NHL today. Before, hockey was more of holding and hooking gameplay, but today it’s better because it’s faster and more physical. He also says that it changed a lot because of the upgrades and equipment.

“The game goes so fast that there are no whistles, but they’re getting paid a lot of money in the NHL. So, they work out all the time, and they have to be better because they just have to know where to be. Better players are the ones that figure out a way to get it as they pass, know where to go to get in front of the net, and go for deflections and get goals that way.” – Brian Propp

To know more about let’s talk about the NHL season and Brian Propp, watch this episode.

Brian joined WCRE as Director of Strategic Relationships. Brian will serve as a C-level brand ambassador for WCRE, introducing the firm to new markets, clients, and industries. Brian works closely with the WCRE sales professionals to promote the brand widely and help the business continue to grow in southern New Jersey and especially in Philadelphia.