New Webinar Training on How to Interview | Celeste Headlee 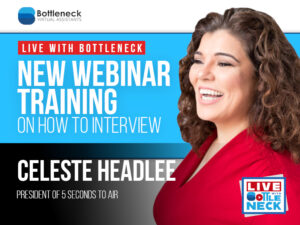 Joining us on today’s episode of Live With Bottleneck is Celeste Headlee. She is an award-winning journalist and public media veteran. Celeste gives tips on how to be a better interviewer. Hoping that you will find this video useful in conducting your podcasts, vlogs, or just help you have better conversations!

Celeste discusses the ways and manners of conducting an interview. She defines an interview as a conversation in which you’re exchanging and extracting information. Celeste says that there are a variety of ways in which an interview can be done. She mentions conversational interviews and rapid fire interviews, to name a few.

Celeste reveals that there is no such thing as an interview “magic.” In addition, she says that people are often mistaken when they blame a bad interview to surrounding circumstances. When an interview goes well, people usually see it as “magic.” However, Celeste points out that conducting an interview is a technique and a skill which can be learned overtime.

“Regardless of what the interview is, it is technique and skill that is going to make the difference between a bad interview and a good one.” Celeste Headlee

Research and Experience is Key

Diving into the topic of Impostor Syndrome when conducting an interview, Celeste says that the only way to overcome it is to acknowledge it. She says that people need to move past it and focus more on preparing for the interview. Celeste points out that research is the best method to familiarize oneself in giving advice and conducting an interview. However, she said that there is really no good advice on how to be a good interviewer.

“I tested every single one [advice] of them and then threw them out because they were baloney. I had to start from scratch. You could say that even my whole career in terms of training this stuff came out of a dearth of information. It’s not just you. It’s all of us. There’s not a lot of good training.” Celeste Headlee

To know more about interview techniques and for more information about Celeste Headlee, watch this episode.

Celeste Headlee is an award-winning journalist, professional speaker, 20-year veteran of NPR and public media and author of Do Nothing: How to Break Away from Overworking, Overdoing and Underliving and We Need To Talk: How To Have Conversations That Matter.

She serves as an advisory board member for Procon.org and The Listen First Project and is the co-host for the Scene on Radio podcast MEN and the PBS series Retro Report. Her TEDx Talk sharing 10 ways to have a better conversation has over 19 million total views to date.