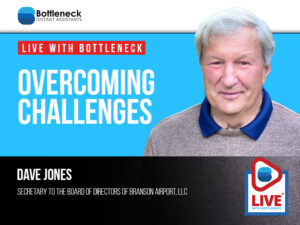 In today’s episode of Live with Bottleneck, Dave Jones shares how he has overcome challenges and how you can do the same as well.

Dave Jones is currently the Secretary to the Board of Directors at Branson Airport. He has an MBA in Dartmouth, and has worked for multiple renowned companies such as the Coolidge Bank, GE Capital, and First Boston, among others.

So if you want to learn how you can overcome the challenges in your life and business, stay tuned to this episode.

Who is Dave Jones?

Dave was born and raised in Needham, MA. He has been an avid hockey player since he was a kid, and continues to be one today. When he went to Harvard, he joined the varsity hockey team, where they competed against other colleges.

After Harvard, he went to work at Boston. Back then, the job market was terrible with 12-13% unemployment rate. Dave ended up working in Coolidge Bank, which claimed to have the first atm in the country. He stayed until he got accepted to Dartmouth, where he took his MBA.

Dave Jones on Entering the Job Market after School

Jaime asks about Dave’s educational background, and how it has helped him in his career. Dave comments that while he did go to a prestigious school, he still had to learn a lot when he started working.

What he really felt like was a great experience for him back in Harvard was meeting friends and acquaintances, and how they have helped each other over the years. Even as they pursued their own paths after school, they have kept in touch.

As for advice on how to be employed and stay employed, Dave has this to say:

“In terms of employment opportunities and things like that, do not be afraid to ask whoever you know. “I really think I like this. What do you think?” Sit down over a beer or a cup of coffee. That’s networking, but it’s just doing it with friends and then trying to expand to people you know. I wish I was better at that when I was younger. I’m better at it now, but I really wish I had done a better job of that right after I got out of Harvard.” – Dave Jones

Dave then gives this advice to those who are not as lucky in terms of their educational background or employment opportunities. That is, to not be afraid to try new things. If the field you have chosen is not hiring, try exploring other fields, especially those that might be closely related to your interests or things you are knowledgeable about.

Trying out other things and building yourself up through it can pave the way to make you more marketable in the future. Be it for a promotion or if you wish to pursue your field again, you’ll have better credentials than before when you only had your degree to back you up.

To hear more from Dave Jones and how to overcome your challenges in business and life, continue listening to this episode.

Dave was born and raised in Needham, Ma. He played for a high school state championship hockey team. He went to Harvard in 1971, where he played varsity hockey. He then took MBA in Dartmouth in 1975-77.

Dave worked at Coolidge Bank, Salomon Brothers, GE Capital, as well as in First Boston and Greenwich Capital. He now works at Branson Airport as the secretary to the Board of Directors.

He’s the father to 4 boys and 1 grandson, and is living at Springfield, MO with his life partner, Tracy Koeneman. He also plays hockey and a bit of golf in Springfield.