Pivoting for the Right Reasons at the Right Time | Wade Forbes 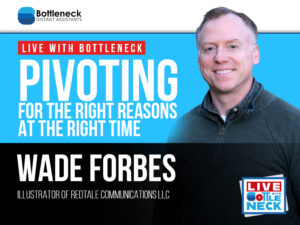 If you feel exhausted and unhappy with your current work, perhaps it’s the time to trust your guts and opt for the job that you have passion for. Take a deep breath and learn from Wade Forbes, an artist, and a professional listener. He has a lot of experience and events that happened in his life to share that can inspire people to take the courage to pivot into something new, especially if it’s their passion.

Jaime asks Wade to share the notes and drawings that he made about Jaime’s conversation. Wade explains that it is a technique called “Sketch Noting” which captures what he hears and thinks. He says that it helps him pick-up quotes and ideas, especially when he’s at a conference and envision sessions.

“It really helped me pivot careers entirely because I’m a professional listener now. It’s actually sometimes funny for me to be doing the talking in a meeting because I love to have my head down capturing all the thoughts, drawing something that could be stimulating that puts you right back in that moment the next time you look at that page.” – Wade Forbes

Wade shares his experience when people accused him of “not listening” because he was always doodling when someone is talking. He added a trivia that people who draw retain more information than those who don’t. He says that sketch noting is essential in his career because it makes him a better listener.

“I illustrated a book over the summer by John Bostock who’s the CEO and co-founder of Truman’s called “The Elephant’s Dilemma”, where an elephant as a baby is chained and as that elephant ages the chain stays there. The elephant retains that fear that it can’t break free and how many humans do you know that right now that are being told to do a job the same way everybody else did.” – Wade Forbes

To know more about Pivoting for the Right Reasons at the Right Time and Wade Forbes, watch this episode.

Wade began illustrating and sketch noting to pursue his true passion of creating art every day. His love of drawing began as a child and was put on hold because he believed he could not make a living as an artist. After spending the last 16 years working in cyber security and consulting with the Department of Defense and the Intelligence community, he’s now bringing conversations to life and creating art for his government clients, non-profits, commercial businesses, his church, and many more. He’d like to live out the rest of his days covering surfaces that help inspire others to do good work and follow their dreams.