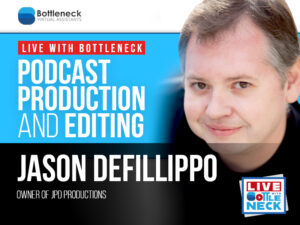 Award-winning podcaster and editor Jason DeFillippo joins us on this episode of Live With Bottleneck. He shares his story to serve as an inspiration to anyone who wants to try podcasting. He also has some tips for current podcasters on how to step up their podcasting game. With experience in producing over a hundred episodes and counting, Jason gives bits of information on how to make your passion for podcasting more profitable.

Jason starts the conversation with how his podcast Grumpy Old Geeks started. After asking his then co-worker Brian to be his co-host, Jason reveals that their original premise is to quit immediately if they don’t make money within the first 10 episodes. Interestingly enough, it was only after hundreds of episodes that they made their first dime.

On another note, Jason shares why he doesn’t like the word “podfade,” because, in their language, it means quitting. He explains that some podcasters are quitting after an average of 13 episodes because they ran out of things to talk about.

“Generally,  a lot of people should quit because they didn’t think it out before they started. They didn’t have a plan for long term growth and what they were going to do. They just didn’t have the chops to do it and that’s fine. I bet it was a fun experiment. They had a great time. They learned something. I don’t begrudge anybody that starts a podcast and gives it up.  We do that.  You got to try.” – Jason DeFillippo

Love What You Are Doing

Jason shares a few more stories when they started the podcast, such as a constant disagreement with his co-host. Coming from different fields and backgrounds, Jason described their discussions to be respectful. Ultimately their passion for their craft is the main reason why they are still podcasting.

“You have to find the passion for what you’re doing with the podcast or it’s not gonna last. If you wake up and you don’t want to do a podcast, podcasting is not for you.” – Jason DeFillippo

Invest On Your Equipment

When asked about their first mistakes, Jason reveals that they had to start with crappy gears. He says that such gears were a hindrance to the development of their podcast.

“If you’re gonna jump in, jump in hot and get the good stuff for two reasons. One, you’re gonna sound better. You have to have good quality audio on a podcast nowadays. It’s table stakes period. But also if you don’t like podcasting, the higher end equipment has great resale value. So you’re gonna lose less money if you quit podcasting.” – Jason DeFillippo

To know more about podcast production and editing, and for more information about Jason DeFillippo, watch this episode.

Jason DeFillippo is an award-winning podcast producer, editor, and host. He’s the co-creator and co-host of the Grumpy Old Geeks Podcast. Jason’s past and current clients include The Tim Ferriss Show, The Jordan Harbinger Show, Follow Your Different, Lochhead on Marketing, The Kevin Rose Show, The Gladiator Way, Foodist, The Forbes List, and more.

Before retiring from technology in 2013, Jason helped build and launch over 250 websites for major corporations like Paramount Pictures, Sony, Warner Brothers, and Disney as well as several startups in San Francisco including Technorati and 8020 Media, the publishers of JPG Magazine, and statistical aggregator Metricly. Jason also created the two-time SXSW Weblog Award-winning web service Blogrolling, as well as co-founded the global blog network Metroblogging.

Posted in Live and tagged Podcasting