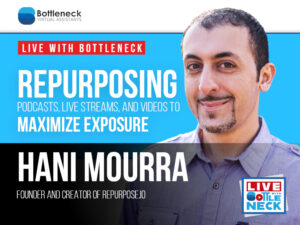 On this day’s episode of Live With Bottleneck, we have today Hani Mourra, a softwarepreneur and the creator of Repurpose.io. He shares his insights and gives an overview of how content creators can maximize the potential of digital contents.

We discuss how to maximize the exposure of video and audio content in various digital platforms through an automated upload. Moreover, we discuss how you can do this while maintaining a space for organic interaction.

Keeping Up With The Trend

“The whole goal is to take your content and distribute it to different platforms with the whole intention of getting the most exposure and doing [it in] an automated way. Content creation is already time-consuming as itself. It helps if you have tools to help automate sending it out, syndicating it out to multiple platforms.” – Hani Mourra

Hani shares that creating Repurpose.io gave him the best of both worlds because he loves content and automation. However, he addressed people’s perception of automation as “not human and personal.” His software allows the creators to engage with their audience for human interaction.

“I would love to touch base with more people if I could. But there’s only a certain amount of bandwidth that each of us as human beings have. So how do we optimize that bandwidth? How do we get there without feeling like…it’s not impersonal…I would still want to have that personal touch.” – Hani Mourra

One of the factors that contributed to the success of Repurpose.io, is its great and responsive customer service. When asked though whether it is a potential replacement for HootSuite, Hani says that Repurpose.io focuses more on the “heavy” contents which are videos and audios.

As of the moment, the software does not have many features for texts and graphics as much as HootSuite. He foresees though that in the future, Repurpose.io may be linked with HootSuite. Hani also discussed the pricing in this episode.

To know more about repurposing podcasts, live streams and videos to maximize exposure, and for more information about Hani Mourra, the creator of Repurpose.io, watch this episode.

Hani Mourra is a Dad, Softwareprenuer, and the creator of Repurpose.io, an easy-to-use automation tool that helps entrepreneurs, coaches, and content creators maximize their exposure without spending hours publishing to multiple platforms.