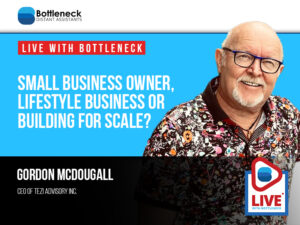 In this episode of Live with Bottleneck, Gordon McDougall joins us again to discuss the topic of defining business practices. We talk all things business, be it small business owners, lifestyle businesses, or building up your business for scale.

Gordon McDougall has long been in the world of companies and finances. When he was approached by a friend to start a company, he began his 30-year journey of startups, entrepreneurship, and mentoring others.

So if you want to learn more on how you can scale up your business successfully, stay tuned to this episode.

Who is Gordon McDougall?

Gordon McDougall was a stockbroker in the 1980s. After being invited to start a company with a friend, he then transitioned to being an entrepreneur and have launched several startups over the years.

Now, Gordon coaches small businesses and entrepreneurs on how to find the path towards growing their business to the next level.

Gordon McDougall on Being Open and Transparent

Gordon then talks about the common pitfalls that business owners that are starting up or in certain stages of development. That is, they tend to keep to themselves – some in fear of information leak, others are afraid of negative feedback or discouragement from peers.

This is where Gordon and his company, Tezi Advisory Inc., come in.

“One of the roles I love to play is creating this safe space for an entrepreneur to share their deepest fears, concerns, worries, and innermost thoughts that they can’t share candidly with others. It’s not only a release; it also gives them an opportunity to actually be in a space of complete honesty.” – Gordon McDougall

This state of honesty is a good things, as it not only gives Gordon more accurate data, it also gives the business owner or entrepreneur an idea of what they need to work on moving forward.

Gordon muses that a lot of businesses do not think about the direction of the business while they are still starting with their business. Whether it be a small business, lifestyle business, or gearing up for bigger things in the future, it is important to have a goal in mind right from the get-go.

For Gordon, this conversation is important to have early on, as it defines what type of strategy they need to employ on their company right from the start.

“The reason I think this conversation is important for a business person or entrepreneur to figure out what game they want to play, and what game they are good at, or what game will give them fulfillment not just in their business, but in their life.” – Gordon McDougall

To hear more from Gordon McDougall and how to define the type of business you want to build up to, continue listening to this episode.

As a stockbroker in the 1980’s, Gordon learned about the world of companies and finances, and then a friend approached him with the idea of starting a company. 30 some odd years later and after several startups, reorganizations, and a lot of fundraising he loves being an entrepreneur and coaching entrepreneurs.