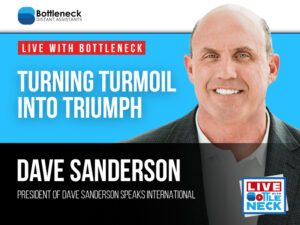 In today’s episode of Live with Bottleneck, Dave Sanderson teaches us how to turn turmoil into triumph. To say that we are living in unprecedent times is a gigantic understatement. Dave himself survived one of those moments of history: he was one of 155 people who faced a real plane crash called the Miracle on the Hudson.

Since then, Dave Sanderson has appeared on multiple talks and have been featured in publications where he shared his experience and what he has done to turn his misfortune into something uplifting. He has since become a sought-after podcast guest and the author of the best-selling books, “Moments Matter” and “God gives you the lesson when you are ready”.

So if you are interested on how you can turn turmoil in your life into triumph, stay tuned to this episode.

Dave tells the story of the fateful day when he got on the flight that would change his life. He recalls how the pilot and the crew did a tremendous job of keeping everyone safe and appearing in control despite the harrowing ordeal in front of them.

Dave was amazed at how people can come together and organize themselves in times of crisis. It goes to show how keeping yourself in control and calm in high-stress situations can help a person adapt and overcome.

“I was honored to speak a few years ago at Delta, and they took me into their simulator where they simulate a plane crash. But you can’t really simulate it; yes, they can basically show people how to get out and how to move and maneuver around. What’s interesting is you can do that all day long and get a 100% success but it’s really when you’re in the moment and the plane is crashing and you see your life pass before your eyes that you know how you’ll respond in the situation.” – Dave Sanderson

When asked how he would define turmoil, Dave uses the experience this year as an example. With COVID and political issues on to of personal struggles, you don’t know what to expect in the next day or week. Still, you have to learn to adapt and find your bearings in order to progress.

Dave Sanderson also talks about a photo of him that was featured in Good Morning America where he was halfway out the door from the sinking plane.

“There’s a picture of me shown for the first time in Good Morning America of me halfway out the door. And so in that picture, (it looked like) I was stuck in the doorway. That’s where a lot of people are right now. If you’re in a Bottleneck or people ask you, look at the last year. You are halfway in, halfway out. Are you going back in and live the life that you have, or go out and live a new life out for yourself? “ – Dave Sanderson

Given the past year and how a lot of businesses took a massive hit and restructuring just to stay afloat, there are some who are stuck at a halfway point. As the situation slowly opens up and returns to a new semblance of “normal”, you have to ask yourself: do you return how it was before, or would you aim to adapt and fit in this “new normal”?

To hear more from Dave Sanderson and how to turn turmoil into triumph, continue listening to this episode.

Dave Sanderson has appeared on Fox News, CBS, CTV, Global TV, NewsTalk1010 and has been featured in publications such as “SUCCESS” Magazine, “Entrepreneur” and “AARP Magazine”. He has helped the American Red Cross raise over $14.7M. Besides his work in sales, he is a speaker, mentor, and trainer; Dave delivers workshops on servant leadership and increasing personal performance in challenging times. He is a highly sought-after podcast guest and the author of the best-selling books, “Moments Matter” and “God gives you the Lesson when YOU are Ready.”