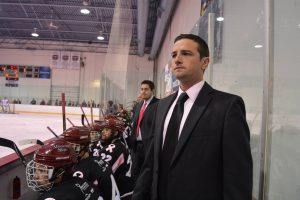 Ryan Armstrong better known to me and others as “Coach Armstrong”, joined the Ice Bears coaching staff in August 2013 as Assistant Coach with the Division II team. Growing up, the Chesterfield, Missouri native, played youth hockey with the Chesterfield Falcons and the Affton Americans. In 2006 Armstrong won the Midget U-18 National Championship with the CSDHL Affton Americans (under Coach Bob Bucher). Along with Coach Bucher and Coach Crenshaw, Ryan played his high school hockey at Christian Brothers College (CBC).

While wearing purple and gold, Armstrong won 3 state championships in 2004, 2005, and 2007. Ryan also played for the St. Louis Jr. Blues in the CSDHL (currently the NA3HL) Jr. A hockey league, from 2006-2008 winning a National Championship in 2007. After his junior career, Ryan committed to Missouri State University where he was a staple on the blueline from 2008-2013. During his time as a student athlete with MSU, Armstrong was voted team President two years in a row as well as serving as team Secretary in his senior year. As a member of the Bears defense corps, Ryan was named an assistant captain his sophomore season and wore the C during his junior and senior campaigns.

While not on the ice, he enjoys relaxing at the lake and the Springfield nightlife. Armstrong currently resides in Springfield and works in sales for Crown Packaging. After graduating from Missouri State University just over a year ago, Ryan utilizes his relationships he developed in school to help him grow his network in a professional capacity. While he is new the professional world, he sure has a great attitude and uses his motivation to pour eveything he has into his profession. 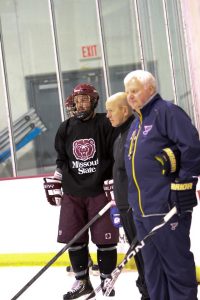 One take-away you can have from this podcast is to understand that anything you do, do it 100%. One of the many things that you have to understand is that you really should enjoy what you are doing, but you simply cannot love every single aspect of your life. That being said, it’s important to always perform at your best. Don’t make shortcuts, becuase it’s the small things, the details.

Ryan Armstrong would like to invite you to connect with him online:

Ryan Armstrong helping to raise funds for the MSU Ice Bears on their run to a National Hockey Championship in 2014:

Stop Riding the Pine is a lot of fun and we love sharing the shows we’ve done. We would greatly appreciate your assistance in helping us grow this show by not only downloading the episodes, but also sharing them. Leave comments and rate our show so we can make the show even better. Here are the links: