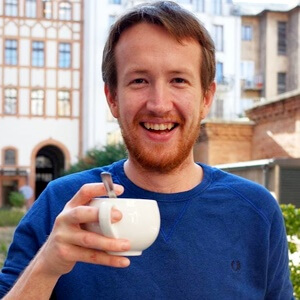 David Hooker is the Chief Evangelist and Head of Creatives at Prezi, an online presentation software that has changed the way how millions of people present an idea.

“Safe and acceptable is the new boring. You have to do something that’s gonna make people remember you, stand out, and be eye-catching.” – David Hooker

David has been in the company for almost 6 years now. As the Chief Evangelist, he works closely with big and small companies worldwide. These include TEDx and South by Southwest.

He helps them get the very best visualizations for their ideas using Prezi. He’s also worked with rock stars like Bono. They’ve also done presentations with people who don’t have such high public profiles but have to go on stage for the first time.

They once worked with someone who was speaking at an IBM conference in Las Vegas. She was nervous considering there were about 15,000 people in the MGM Grand.

David was working for a large South Korean electronics manufacturer. He was working in the Construction and Trade Division. The job was to write the proposals for all of their projects.

All the information they received were then turned into presentations. They used conventional presentations with the slides format. It was not until they came across one company-wide presentation contest.

The company had 35 different affiliates. They did everything from insurance, construction, trade, security, and more. The challenge was to come together and present a topic.

“Infogram takes the ability to make really cool infographics and puts the power in people that have zero design training.” – David Hooker

David and their team looked for something that set them apart. One of their team members introduced them to Prezi. They used it in the contest and won the grand prize.

Not long afterward, he wanted to do something else. David has been at his job for quite a while and so thirsted for something new in his life. He used Prezi in creating his resumes.

During that time, Prezi was looking for someone to join their team. They invited him for an interview and flew him to Budapest for a week. That started his journey with them.

To hear from David Hooker, download and listen to the episode. Connect with him through the links below. Remember to let David know you heard about him on Stop Riding the Pine!

If you haven’t checked it out yet, listen to our previous episode David Allen How to Get Things Done | Ep. 215. Don’t forget to leave a 5-star rating and review if you enjoyed the show. We would love to hear from you!

1. used to refer to the person or people that the speaker is addressing.

You are important because you have many traits that make you unique. From the way you look to the way you talk, people need you just the way you are. Personal growth is a process of both understanding yourself and pushing yourself to reach your highest potential.

1. an idea or opinion produced by thinking, or occurring suddenly in the mind.

Knowing yourself starts with knowing your thoughts. Your mindset is nothing more than a compilation of your thoughts. Thinking is an important mental process. It helps you to define and organize experiences, plan, learn, reflect and create. But sometimes your thinking may for a variety of reasons become unhelpful and this has a negative impact on our well being.

It is important to manage your thoughts because it shows you where your focus lies – where you want to spend your time and energy on.

1. having or showing intelligence, especially of a high level.

Intelligence is the ability to think, to learn from experience, to solve problems, and to adapt to new situations. Intelligence is important because it has an impact on many human behaviors

Intelligence allows leaders to evaluate others’ opinions and hypothetically place them into the plan and see if they fit in. Using valuable inputs that work out for the better often boosts employee morale and allows for better efficiency.

1. carry out a systematic or formal inquiry to discover and examine the facts of (an incident, allegation, etc.) so as to establish the truth.

It is the quest to find answers using various methods. For business analysts, work is concerned with uncovering problems and issues. It involves using a range of investigative techniques, and choosing those that are most appropriate to the situation being examined. It also involves documenting what has been found. With careful examination or search, substantial facts, truth, and knowledge can be gained and discovered.

1. a set of circumstances that makes it possible to do something.

Opportunities allow businesses to create and implement ideas and innovations and improve their performance. Only those who spot opportunities early can take the best advantage of them and capitalise on them.

1. imitate the appearance or character of.

Simulations are a proven tool to improve learning and also create a positive environment that encourages experimentation and accepts mistakes, a very important thing in the context of learning.

It promotes the concept attainment through experiential practice. Business simulations are a hands-on, interactive learning experience that allow participants to truly engage in the material. Instead of focusing on theoretical knowledge like in a typical classroom, participants build skills, improve conceptual knowledge, and gain a big picture view of the organization all at once.

1. feeling or showing doubt about doing something : not willing or eager to do something

The word reluctant comes from the Latin reluctantem, which means “to struggle against.” These days reluctant means “unwilling.” Fear of making the wrong decision is one of the reasons that many people hesitate when faced with a choice. You may be afraid of failure or even the consequences of success. You may worry what other people will think about you.

If you can’t make a decision, there’s a good chance that you’re afraid of something. Figure out what it is and write it down. Ask yourself what you’ll do if your fear comes to pass. Is it truly possible? If so, how will you cope?

1. to open something, especially a door that is locked.

Unlocking means to discover important new facts about something and make them known. Most people don’t tap even a small percentage of the potential that they have. They take themselves and their knowledge for granted, think they can’t increase it or grow any more and are happy living confined in their cocoon of average.

But mediocre is not what you are meant to be. Not when you have the ability to shine, excel and achieve all your goals. And certainly not when you have it in you to become extraordinary. Like unlocking your full potential, it also makes it possible for something to be used well, when previously it may not have been used enough.

1. a strong desire to know or learn something.

Curiosity is the expression of the urge to learn and acquire facts and knowledge. It widens the mind and opens it to different opinions, different lifestyles and different topics. ​​It improves engagement and collaboration.