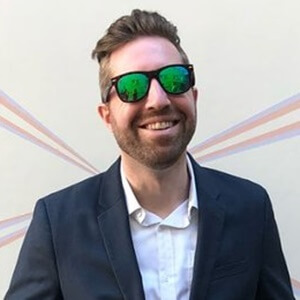 Rob Cressy is a humorist, content creator, speaker, and Founder of Bacon Sports. A bootstrapped solopreneur, he started from zero and had to create ways by himself to move forward. He now shares the lessons he’s learned with others.

Rob is both a creative and a business-minded person. He’s fused his passion for both of the fields into what is now known as Bacon Sports.

He is on a journey towards creative freedom. More specifically, his goal is to turn the sports blog into the most awesome sports media company. He is now living his dreams and making things happen.

Rob lived in Chicago where he lived across the #1 comedy training center. It was famous for its talents in the likes of Chris Farley, Bill Murray, Tina Fey, and Steve Carell.

“People purchase from people that they know, like, and trust.” – Rob Cressy

He took comedy not to become a comedian. He wanted to learn the skills instead and apply it to his marketing and published content.

Being a business owner exposes one to sales. Humor takes the edge off a conversation. As Rob explains, it cuts through like a Japanese knife.

“You don’t have to be in a specific mood to laugh and get the humor.” – Rob Cressy

No matter what it is, when it’s funny, it’s funny. Because of that, his approach to the content he creates includes entertainment. The same applies to the way he works with brands.

When one is looking to stand out, one may consider applying humor because it is universal. Not to mention, it is loved by people everywhere.

To hear from Rob Cressy, download and listen to the episode. Connect with him through the links below. Remember to let Rob know you heard about him on Stop Riding the Pine!

If you haven’t checked it out yet, listen to our previous episode David Allen How to Get Things Done | Ep. 215. Don’t forget to leave a 5-star rating and review if you enjoyed the show. We would love to hear from you!